I was searching for a late afternoon hike in southwest Virginia and found The Channels. It looked very amazing online with “east coast” slot canyons and other rock features. I was excited.

Trusty Google maps took me down a long and winding rural road and turned me onto a dirt and gravel road in The Channels Natural Area Preserve. About a hundred feet up the road was this sign.

I wasn’t sure if the 3 mile trail started here or at the end of the gravel road or if that was one way or round trip distance. I figured I would drive ahead and see. The road was rough and a high clearance vehicle would be preferable although if it was dry then a car could make it if you take it easy. After driving a couple miles and passing through several open gates, I came up on a locked gate. I took that as indication that I should proceed on foot.

After a ways of steady, but not steep, incline I came up on an open area with 3 paths leaving in a fan pattern outward. There was no sign. After deliberation, I took the most likely path which was the left fork as the trail snaked much more narrowly into the brush.

I started getting a little anxious and nervous because it was darker in the woods and you could hear creatures rustling about. I figure The Channels has black bears so I didn’t want to run into one alone. I started singing a bit which should scare off anything or anybody. This part of the trail was much steeper and more beautiful but I had the feeling I had gone a long way and had no indication that this was the right direction. The multitude of spiderwebs across the trail and the fact I saw no tracks (except dog/coyote) concerned me I was off in the wrong direction. Only the occasional red blaze kept me going. Finally I ran into a sign saying I was in The Channels, except I was still in the woods. 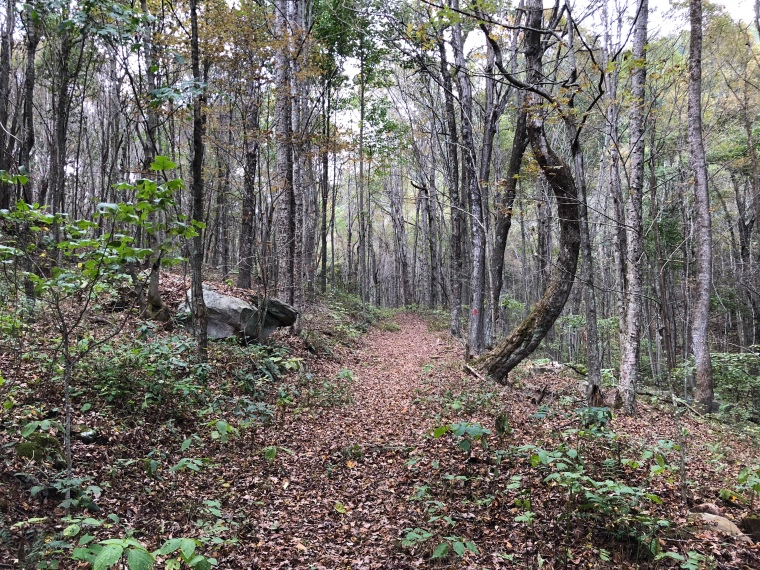 I figured I must be close now and redoubled my pace up the trail that was now more steep than ever. I passed a nice stream flowing downhill and abruptly the trail ended at a fence. I had passed through The Channels Preserve and come out the other side.

I saw that the red blazes continued north along the fence line. However it was getting late and I didn’t want to get caught here after dark since I hadn’t brought a headlamp or flashlight. I decided to turn back. Since the return was all downhill, I took most of it at a jog and made much better time. I did stop to take a picture of the trail that I thought was particularly pretty and of a cool old growth oak. 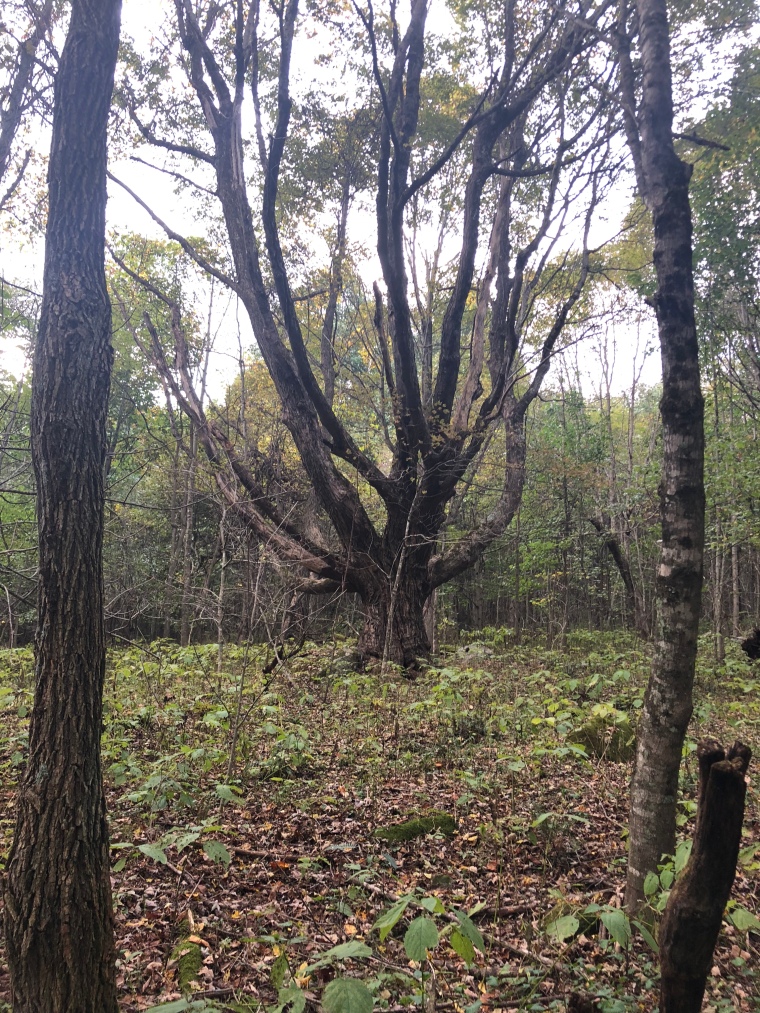 Once I got back to the open area It did seem a bit lighter in the sky so perhaps I could have continued and found the rock features this area was named for. But caution probably was the best option as no one would find me up here in this secluded area for who knows how long if I had gotten lost.

After counting my steps, I figure I hiked about six miles round trip. I’m not sure I was even on the correct trail. However, I had fun and got a workout so the hike must be considered a success. I hope to get back up this way again soon to try and find the Channels this Preserve is named after. As always, thanks for reading. rk